Well, the Big Wind blew through Northeast Mississippi all day. Liked to have blown us clean off the map, too.

The TV news said wind speed in Tupelo got up to 71 miles per hour. That is hurricane speed, friends and neighbors, and I’ve never heard blowing that hard without there being one. The mayor of Tupelo, Jason Shelton, was stuck in his house because of fallen debris and had to be carried to the hospital “for observation” when he was extricated. While I haven’t heard of any full-on tornadoes, trees fell while houses and businesses took a lot of damage, with power outages all across the region. It’ll probably be the first of the week before we get a price tag on the damage. Here’s the latest from The Northeast Mississippi Daily Journal.

Here in Peaceful Valley, where the roses never fade, we got blown around plenty but I don’t think there was much damage done, if at all. I hadn’t heard, anyway, of anything drastic. Worst we had to deal with was the wind causing the television and internet to conk out sporadically. Made some folks miss their football, but I spent all day reading, so damn the torpedoes.

I finished off When Gravity Fails. The twisting noir detective tale wrapped itself up in a satisfactory and decently Hammett-esque end. Hearts were broken and alliances were lost, just like a good, gritty noir pot-boiler should. Very hardboiled and softhearted, so it does come recommended. I was unfamiliar with George Alec Effinger’s work prior to stumbling on this story – think it was suggested to someone else on Twitter – but I definitely enjoyed his mixture of whodunnit and cyberpunk. That’s interesting; I thought this was a new work but turns out it was written in 1987. The rather forward thinking on both Islam and transsexualism is all the more striking, then.

Reading more, this is a shame. Effinger died in New Orleans in 2002. He’d suffered a number of health problems during his life to the point that the enormous medical bills forced him to declare bankruptcy. Bless his soul. He has an oeuvre that goes back to 1972, and I now feel a bit obligated to dig more into his work. If When Gravity Fails is a standard, it’d be worth the effort.

Well, it come up in discussion – in a roundabout way – last night and it’s been a question that’s been thrown at me quite a number of times over the years, with varying degrees of challenge and genuine curiosity. To wit, how do you know who to trust when it comes to bring you the News. We live in a mercurial, confusing landscape of television, print, radio, and all sorts of internet, and even if you’re not ideologically beholden and just interested in staying well informed, it can nevertheless be a confusing mess to sort through.

Even the very mediums need to be held to the tightest scrutiny. This week’s seen Facebook proprietor and pencil-necked geek Mark Zuckerberg regularly raked over the coals in the halls of Congress, and rightly so. They’re giving white nationalist cesspool Brietbart equal footing with such stalwart luminaries as CNN and The New York Times. That being said, one would do themselves a serious injustice to take either the Times or CNN – or any of the big corporate names in the news – at full value, as both have shown themselves to be at times sloppy and lazy as well as working hand-in-hand with the U.S. government for everything from the Iraq War to letting those responsible for the bank failures of the Aughts to get away scot-free.

So who do you trust? Most of us have no idea who actually owns CBS or FOX; that is, we don’t fully grasp who those sources are beholden to and, more importantly, what they won’t tell the average news consumer. Even individuals, you have to be careful. They can screw up or be bought or just be dirtbags. Reporters are only human, fallible in all the ways the normal person is. Everyone of us has the occasional bad day. So again, who do you trust?

Well, I’ll tell you. Now this is based solely on my personal experience, from 15 years working in newspapers and magazines in almost every capacity except for delivering the damn things. Furthermore, I’ve got an actual, bonafide degree in journalism that I earned back in 1997 from the University of Florida, and even though it’s been longer than I’d like to admit, it’s still good. On top of all that, I’ve got a life-long fascination with the News, not just as a source for information but also how it develops and grows and changes with the society it seeks to serve.

So, Matt (I hear you exclaim with some irritation) who do you trust?

Nobody. Trust nobody but yourself and your own skills and wisdom to suss out the facts of the matter. Not the truth; the truth is subjective and ephemeral. With that in mind, if someone tells you they’re giving only “the facts”, don’t trust them, neither. With the onset of social media, it’s gotten so that anyone who claims to have “the facts” and the facts alone – especially in they throw in horseshit about “logic” and “no emotion” – is probably blowing so much smoke up their own ass they shouldn’t be allowed to drive.

Okay, so how do you get to the point where a sharp thinker can pull the wheat from the shaft in this never-ending cacophony of information we have blasted at us and vying for our attention (and ad money)? Well… that I don’t know if I can tell you exactly how to do that or even if I’m qualified to do so. Hopefully, though, I can help you get started.

For what it’s worth, there are only two books I’d recommend as essential for forming a well-developed ear for good news. The first is Manufacturing Consent: The Political Economy of the Mass Media by Edward Herman and Noam Chomsky. This is a pretty good introduction to how the underlying economics of publishing warps the news; that is, who’s paying to keep the lights on has a say in what the news says, and you’re a naive fool if you think otherwise. A quick, easy read, the book is a little old but unfortunately still relevant in today’s media atmosphere.

The second book I’d recommend isn’t a book on journalism but it’s still an excellent manual on thinking critically. The late Carl Sagan’s The Demon-Haunted World: Science As A Candle In The Dark is a wonderfully enjoyable book that helps the reader develop their own “baloney detection device”, which is useful not only for pulling actual science out of the horde of nonsense, but also works as a good primer on using logic and the very reason we’re born with the navigate a confusing world full of bullshitters who’re looking to fleece you for everything you got.

The other thing I’d recommend familiarizing myself with is this short piece by WNYC Studio’s On The Media program, The Breaking News Consumer’s Handbook. What with Twitter and all, keeping up with how fast the news comes at you is almost a branch of quantum physics and I do think the media sources themselves, in a rush to get there the “firstest with the mostest”, don’t always do the job they should. It helps to slow down, maybe stop, and think before you go spouting off whatever nonsense comes to mind. 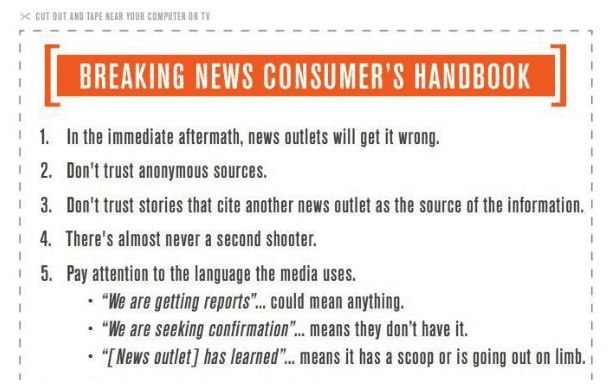 Another thing to keep in mind is that the quality of a media source is always in flux. What with them no longer having an ombudsmen, the NYT’s opinion page isn’t worth paying attention while FOX’s once-serviceable straight news efforts are sad jokes. Finally, never, ever think the people running these papers or television stations care a tinker’s damn about anything other than making as much money as possible. Since the early ’90s – or at least since Reagan killed the Fairness Doctrine – news outlets of all sizes across the country have fallen prey to hedge fund groups and media conglomerations.

Don’t trust the rich man to do right by you. You’re just the help and you are replaceable.

So, trust yourselves and no one else when you read the news, friends and neighbors. Our society has pounded into our heads that we must put our faith in something bigger than us, but at the end of the day, all you can really count on is what your own reason tells you. It’s not easy and it’ll piss some folks off, but it is worth it.

Okay. That’s enough I think. The weather’s calling for sun and warmth tomorrow as we all pick up from today’s blow. That’s good enough for me. Adios.